Very happy with the Blind collar and lead. Such a relief I no longer need to explain my dog is blind. Would be great to have an option of a different colour as the collar gets a bit lost on my white Bichon (in between grooming visits). Great business and fast delivery.

For the last 7 years my now 13 year old dog has worn the blue ‘therapy dog’ harness which I purchased from friendly dog collars with the matching leash. He has saved my life three times by staying with me and calling for help after I had suffered from a clonic tonic seizure, I also suffer from Fibromyalgia and PTSD, everyone who knows me also knows Harry.

Unfortunately Harry began showing signs of Cushing’s disease towards the end of 2021. In January we began investigating the Cushing’s disease. He had gone from 5.7kg to 9kg (from the Cushing’s) and still could fit comfortably in the harness with adjusting.
Unfortunately during an abdominal ultrasound that was undertaken on 18th January, Harry began to vocalise in the middle of the procedure, while under a light sedation. We noticed straight away that he wasn’t himself but thought it was the medications. Unfortunately after two days of crying and him refusing to jump in or out of the car or up/off sofa I knew something was really wrong.
Went straight to the vet and found out that during the ultrasound Harry must have suffered from a Stroke, the damage caused by the stroke had caused 100% complete blindness in both eyes.

As soon as I found out I was heartbroken for him. But promised to make his life comfortable, pain free and happy.

I decided to retire him from being my therapy dog… even though he STILL wants to be my therapy dog. I ordered the “blind dog” Harness for myself and the collar for when my parents want to take him out.

I have taken him out once as we have had a lot of hot weather lately which isn’t good for his Cushing’s. But when we did go out so many people stopped to live on him because he had the “blind dog” harness on him.
I also had two separate women approach me to ask where I got the harness from as they also had blind dogs and really liked that the harness said his disability nice and clearly.

I even had another lady who had a blind dog that passed away last year and I was talking about maybe getting Harry a dog carrier/pram for him for when he gets too tired. She said she had one and was happy to gift it to myself and Harry. Which was so helpful as I am a pensioner.

These harnesses, leashes & dog collars have been a huge blessing for me over the last 7ish years. My doctor has seen me be more independent as I can now go out with my therapy dogs (as Sookie has been in training and is able to do the same as Harry).
And now in Harry’s retirement FDC have helped once again by notifying the public that Harry is a blind dog.

I don’t know how many times over the years I have told people about friendlydogcollars.com.au but I love them because they are an Aussie company, have great prices, beautiful and well made products (my therapy dog harnesses and leash still look brand new), easy to read, comfortable handgrip leash and super soft collars and harnesses.

Will only ever purchase my dog products from this website from now on and will always recommend to any new dog owner or any owner who requires a specialty written collar, vest or harness. 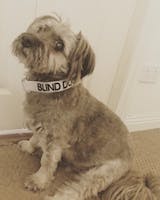 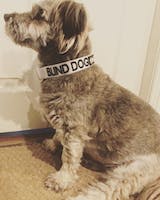 I recently bought the Blind Dog collar in size small and I think it would be great for many dogs but my dog’s neck is quite slender. The clip in chunky (but looks strong) and the collar is quite wide. Unfortunately its too bulky for my doggo and at 16yrs old I think he needs his comfort. If you made a slimmer version with smaller clip I would definitely buy that