WARNING: Not suitable for tiny dogs such as chihuahuas. Customer feedback deemed the leads too heavy for tiny breeds

Absolutely LOVE IT...my girl is an assistance dog and even though I have the harness and permit etc people just walk up to her and help themselves to patting her so I’m hoping that this lead gets through to them without me being rude to them 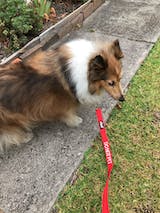 This has been great to stop people from overwhelming my anxious rescue dog. We did think of getting the 'anxious' lead instead but as she loves other dogs it's really people that need to keep a distance. She was previously treated badly and hates strangers going over her head to pet her or invading her personal space (which I mean I wouldn't want that either so I get it). This has helped stop people mindlessly trying to pet her, although some people still ignore it (which is ridiculous when it is bright red). Although it sometimes means people think she is an aggressive dog and avoid us, I would prefer that to increasing her fear of strangers, as this way I can control how people approach her and she's doing a lot better! I would highly recommend this lead & collar.